Maryam Sanda: "If Your Husband Cheats On You, Cheat Back." 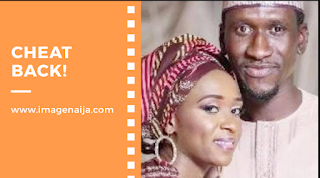 I am going to dive right in. I don't think there is any need to be formal especially as I do not have the time for that.

News made rounds yesterday that Maryam Sanda who murdered her husband in cold blood for alleged infidelity has been sentenced to death. I don't know the real reason, but I believe it has something to do with infidelity.

While it is sad that she was sentenced to death and she killed her husband, I can only think of the little child who might grow up without parents because her parents made a bad decision to get married to each other.

I know most religions do not accept divorce, but I believe that if two people are clearly not ready to make a marriage work, they should be allowed walk away. Some people are not forgiving at all especially if you abuse them or you are unfaithful.

If two people in a relationship are having issues, leave them alone. Don't tell them to pray, pray, pray, fight the side chic or dude or be submissive especially when the issue is not even about being submissive.

The rate at which people are murdering their spouses is on the high side and two people would be alive if they decided to walk away and raise their kids like reasonable humans.

If you are unhappy in your relationship and you cannot take it anymore, the option is not to pray and still be there because you might get so upset that your anger would lead you to do something stupid. As always, people would stay stuff. They will tell you being divorced is a dent to your image and children will hate you. I believe it is more honourable to go than stay and think of how to kill your husband.

Nkechi Bianze reminded us that some women go as far as poisoning their husband little by little or even send people to kill him. They do this because they would rather be widows than divorcees.

Abeg o, if it is not working, instead of being miserable and finding a way to kill your spouse, walk away or if you are still interested in being married to that person, Nkechi said you can cheat back if it will make you happy.😁 Instead of cooking with your feaces or menstrual blood, this might be a better option.

Whatever works for you anyway, but in whatever decision you have, kindly erase murder.

What do you guys think about the verdict of the judge? Is it too extreme? What would you do if you find out your partner has been cheating on you? What would you tell a friend if he/she complains to you about a cheating spouse? What role do you think religion has to play?