'Mad About You' Movie Review

Blossom Chukwujekwu is such a joy to watch! 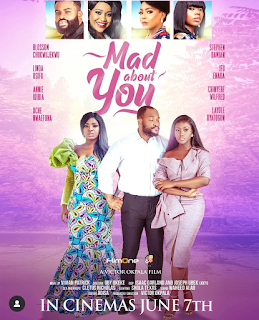 I have had a hectic year. I haven’t taken myself anywhere this year, I haven’t gone to any fun place, and that is so unlike me. So, yesterday, I decided to have ‘me time’, and I went to the cinema alone! I wanted to watch Mad About You, and I tried to go to the Lighthouse Cinema, but they were having a meeting. I checked online, and I found out that FilmHouse Cinema Surulere is showing the movie by 6:10 pm and since I didn’t want to go back home without seeing the movie, I decided to go there.

Mad About You is a film which parodies the celebrity lifestyle, especially in Nollywood where most of the stars think they are in a silent competition with another. It also a significant point, which is most celebrities make the whole social media love for the show when, in reality, they do not love themselves.

Blossom Chukwujekwu was funny, charming, and excellent. I watched him on Knocking on Heaven’s Door, and he gained a huge fan since then. Oh, that fan is me. He killed his character as Dami, a Nollywood superstar in Mad About You. His expressions, mannerisms, and everything made Dami such a joy to watch.

Linda Osifo as Nkechi (Kech) was excellent, she nailed the character, and her character annoyed the hell out of me which was supposed to happen. She was a celebrity who was into the celebrity lifestyle and will do anything to outdo whoever she feels is in a silent competition with her. Things like having an engagement party one month after your engagement because her rival in the entertainment industry had one or going to a very pricey restaurant with bad food just because her opponent eats there.

Chinyere Wilfred who played Linda’s mum is the kind of mother who has got your back. Well, birds of the same feather, flock together. She was solidly behind her daughter’s materialism. Both of them were out to finish Dami’s money, making Ifu Eenada who played the role of Nkechi’s sister to question her family. Chinyere is that kind of mother who knows what’s up. She is even more current as regards the trends than her kids.

Uche Nwaefuna is so pretty. She wasn’t a major character, but I just really wanted to see her. She’s a good actor.

Annie Idibia I do not have much to say about Annie, but she played her part well as Dami’s love interest.

Ifu Eenada, I was feeling sorry for her. When your mum and your sister are against you because you are sane, I don’t think it is cool. Like, your opinion in the house doesn’t matter because you are not as vain as they are.

Despite the compelling performances by the cast, especially Blossom Chukwujekwu, Linda Osifo, and Chinyere Wilfred, Mad About You which started on a sweet note had to spoil it by giving us a very predictable end.

Generally, I would give Mad About You 85% because of the end; It had such a great prospect. However, I loved the movie; the audience loved it too. The movie quality was applaudable, and Victor Okpala did an excellent job. If you need a feel-good movie to calm your nerves, you should go to the cinema and watch Mad About You. I am not going to give you a summary of the film, but I recommend it. Don’t worry, this is not me hyping it because I was paid, I wasn’t paid for this, but you guys should go and see the film.
Labels: Mad About You Movie Review Nollywood