Is It Wrong For A Married Man To Have A Girlfriend? 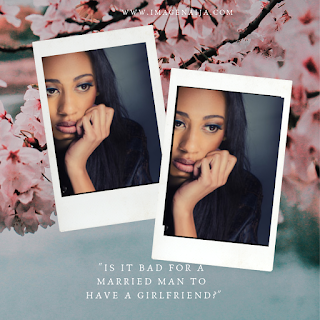 Last week was a crazy and hectic week for me. I had a lot of deliverables and the time wasn't on my side at all. I planned to rest during the weekend, but that didn't pan out well. I still have a lot of work to do. I am just going to publish, share and go to bed. How have you guys been?

Blez travelled to Nigeria, so I have not been able to get information as regards Bella since the NAPTIP encounter. I am glad he is back to Benin, we can kick it off from there. Sorry about my inconsistencies, work is trying to come in the way, but I will try to do better.

I was supposed to publish our INK-HWM (I Never Knew He Was Married) segment yesterday, but as I said, I was busy with work. I took out time to post this story. Read, leave a comment and share.
http://www.imagenaija.com/2019/04/my-wife-is-not-outgoing-type.html?m=1

Things were hard at home; my dad had no job, my mum's provision business just collapsed due to lack of funds to restock her shop. So instead of staying idle, she decided to go into fruit business. I had just graduated from secondary school, so I was practically inactive as there was no money to go and learn any handwork, coupled with JAMB wahala.


So I decided to assist my mum in the fruit business thing, she had a stand in this building material complex at Abule Ado, and it comprises of mostly Anambra people.


There was this regular customer of ours then, due to our faith we don't sell on Saturdays. He asked why we don't come on Saturdays, I told him, I am an Adventist, we worship on Saturdays, so no business.
That was how he came up with the gist that he has a brother who attends our church. I then asked his name, he mentioned it, and I told him the name didn't sound familiar, he then said he would be coming to his shop in the evening, and he would introduce us. I said no problem, I then went and told my mum about the guy. Evening came, I went back to the shop saw the brother, and he was looking strange to me, I asked him where he worshipped, he mentioned my district. I wondered how come I hadn't seen him all my life; he then told a story how he was living around Yaba and was worshipping in Maryland before packing into satellite and worshipping in Festac, to be sure I asked him who the First elder was, no idea. What about the pastor, no idea. Haaa! How come you have worshipped in Festac, and you don't know the name of your pastor or first elder. He was now like he hasn't been around and all, and indeed in the later years, the brother was hardly coming to church, so I figured why he didn't know their names.

I took my mum to him, they greeted, and he narrated the same thing he told me, so my mum was like I'll see you on Saturday then, he said yes.


Saturday came, and we found out he was married, and his wife was preggy for their first child. He was newly married. That was when my mum pulled my ears and told me to back out, even without her telling me; I knew he was no go area. But Oga refused to let me have my peace, kept disturbing me and all. I told him, but you are married, and he said, "Ehen! Is it wrong for a married man to have a girlfriend?" I told him I don't know, but I don't want us to be friends.


It got to a point my mum noticed because even on Sundays, he would call that I should come and see him, but I refused. It didn't end till I got admission into the school and he stopped calling me. His brothers even laughed at him too for not knowing.


We got to church and he was sitting close to a woman who was pregnant, my mum out of curiosity asked who she was, and he said she was his wife. I was sitting behind him, so I didn't know what was going on, but my mind told me she might not. Till we got home, I asked my mum, and she confirmed it that he was married.
In my first 2nd year, he called me and was complaining about how I didn't tell him; I got admission, blah blah blah. It was my mum he asked, and she told him.


I asked him why I should, he was like so he would get stuff for me. I just said in my mind; this man must think I'm stupid o.

The thing is most of them do not feel it is wrong for them to have girlfriends. I have said it countless times; there are girls that would still date married men. If you are married and you have made up your mind to cheat, stay away from girls who are not interested in dating married men and find those who are genuinely interested in married men. It is that simple.

What do you guys think? The sender and I will be in the comment section. If you sent your story and I have not published it, please be patient. There are a lot of stories on this discourse, and I will get to yours. Have a wonderful week.
Labels: I Never Knew He Was Married Infidelity Marriage Relationship Relationships