The only mental image I could create was myself being HIV positive, to the extent I was dreaming about it. To be truthful, I became holy, made promises to God to save me this once, I will not do it again. 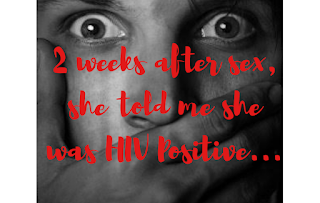 http://www.imagenaija.com/2019/05/i-will-never-have-sex-again-till-i-am.html
I started imagining how I will tell my parents, what lie I will say to them. If you know my parents, especially my Mum, you'll understand what I mean.  It's either she falls, or she will make life a leaving hell for you that is if you'll be allowed to even stay in that house with them.  My dad,  will SHOOT you, and close your chapter. He readily tells anyone he doesn't know you when you get into trouble because that's not what he sent you to school to do. My parents are rigorous; you can't mess up. The thought worsened because it was a Friday and the test centers had closed for the weekend, so I had to think of suicide before Monday.

My life was not the same; that was the worst weekend of my life.
The thought about me being a patient darkened my mind; I withdrew from the public, friends, began living a solitude life.  My mind kept telling 'see how lean you are, and you have HIV? What an achievement! At what age? Nigga, kill yourself!' That Sunday I couldn't go to Church as I was waiting for Monday.


Finally, Monday arrived.  I wasn't myself in the taxi from PK10 to SEME KRAKE; I couldn't think straight.
In my mind, I was gradually becoming a saint. I confessed my sins and made God promises never to KNaCK again.

I left home very early, cause I couldn't sleep. Only to arrive at the border as early as 7 am, then I went straight to the first clinic.

On arrival at the first clinic, the woman in charge of the laboratory hadn't arrived yet, in fact, the people who were on night duty just closed and i was told to exercise patience. Sincerely, I didn't even have the patience, let alone enough to apply some. I left and went to Badagry.

When I got to the clinic in Badary, I met the matron who was already angry at someone that morning, and after the salutation, I found it difficult to express why I came. She began to yell at the top of her lungs that I shouldn't come here and waste her time that early morning. Due to her attitude, I couldn't open up to her; I was scared she would also yell at me should I be positive. So I hurriedly left. On returning to the border, the HIV & AIDS test spot had open. Still, I couldn't sum up the courage to go in, so I began wandering around the environment. People weren't going in, so it was easy for the officials to spot me.

A young girl approached me and said, just come in, we have been watching you since. I told her I was waiting for someone, and she said if that were true, I wouldn't look disturbed. I now open up and ask her if they had opened for the test, she said yes. I went in with her.
I registered at the counter and got a lot of pep talk.

Trust me all through the talk; my mind was not there. After the discussion, the guy asked questions, which I answered yes to all of them. He then brought out the test Kits, and then the testing began. I was crying. I was begging God, and the man was being nice and consoling me.
Five minutes later, the test Result was ready and boom. The man said: 'You are negative, why are you crying?'

I immediately went on my knees to tell God I wasn't going to do such again. My joy knew no bounds.

Dear blog reader Davince, if you read this, I have something for you for being consistent. Kindly send an email to imagenaija@gmail.com with your phone number attached or just leave your phone number as a comment.  I know I haven't been consistent with this, but I will be a better person from now on.