We Trekked From Niger Republic To Benin Republic 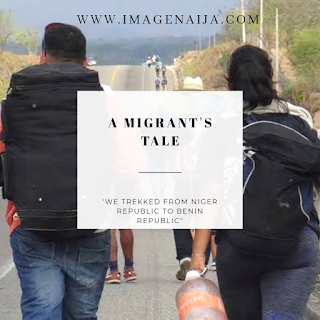 As an anti-trafficking advocate, I was in Benin Republic during the weekend and what I saw people of God pass me. I finally met Bella and I really tried to be strong when she told me her story. If you haven’t read her story, click on this link and this link to read.

I am not a very emotional person, but Bella’s story got to me. I will post everything with regards to Bella and how far we have gone on Wednesday. For all those sending me dms about posting too much, if I do not, how will we get this help that we so need? If I do not reach out, how are people going to be aware of the effects of modern slavery or organized crime?

On our way out of Union Des Chambers Interdepartmentales Des Metiers Du Benin (show me how good your French is by translating what I just wrote), we met two migrants. Okay, I was talking to Blez and they heard us speak English. They were so happy.

Moses and Abraham are Liberians who went to Libya so they could use that route to migrate to Italy as they wanted a better life desperately. Only they ended up as victims of modern-day slavery; they were sold off as slaves by their own African ‘brothers’. They later got into prison and somehow the United Nations were involved and they were set free. They were given some money to find their way.

They left Libya for Niger Republic and when they got the Niger Republic, they had no money on them. They had to trek from Niger Republic to Benin Republic, Cotonou precisely. See, I have always known that people trek, but I never knew that trekking from one country to another is possible, I heard it is anyway.

At Benin Republic, they were looking for the Liberian Embassy and they were told to go to Togo as there was none in Benin Republic. They were stranded and they had no food. Don’t forget they couldn’t speak French so communication was a big issue for them, they couldn’t ask for help too. You can imagine the joy on their faces when they heard us speak English.

Moses has this very nice English accent, Liberians speak well anyway. From the way they looked, they were really stranded, they had this stench too. I had 1000 CFA so I gave it to them to at least find food. Hopefully, they will get to Togo soon so they can find the Liberian Embassy in Togo and find their way from there. I really hope they do not trek.

Organized crime and modern slavery are real. Like, we insult the whites for colonization and we call ourselves siblings in Africa. If we really are, why are we selling our ‘brothers’ and ‘sisters’ as slaves? Why are people still going to Libya? Why do they still think that is the best route to go with regards getting to Europe? I am all for legal migration as you cannot come and kill yourself and go and die, but if it’s not legal, don’t do go. Don’t! So you do not end up as a fugitive in another man’s land. I already know people have done this and have gotten their green, blue even white cards (note the sarcasm), but do not forget the majority that is living in fear.

What do you think guys? You know I am always waiting for you at the comment section. Have a fabulous day and don’t forget to subscribe to my blog, big things are going to happen here. You heard it from me.