My Wife Is Troublesome! 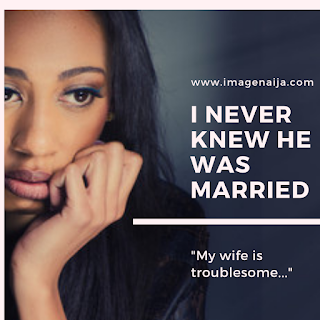 I met him at a club when I was having a fight with my boyfriend. In fact, my boyfriend just broke up with me because I snooped and I found a not-so-good text message on his phone. He blocked me too and trying to get over him was hell. I know, right? Trying to get over a guy that doesn’t deserve me, but you know what people in love do stupid things! My ex and I dated for 2 years. We started dating when I was in secondary school and he, on the other hand, was in the first year. When it was my turn to be in the wonderful and exciting first year, he broke up with me for snooping.


I was trying to get him back, but it wasn’t working. A friend of mine in class who is a coded-runs girl invited me to a party. I honestly didn’t want to go to the party, but what did I have to lose? I didn’t have a boyfriend anymore so I might as well have some fun. My friend told me that her boo was coming in from the states for a friend’s wedding and he was coming in with his friend, I decided to go to the party and just try to hang out with people for a night. I just didn’t want to mourn my relationship anymore. My friend gave me a short black gown to wear for the party. We arrived around 10pm; I am not a night crawler or a party animal so I was kind of uncomfortable. By 11:45pm, the guys from ‘the abroad’ arrived. When they showed up, one particular guy had his eyes on me. I wasn’t even wearing makeup. Finally, I was introduced to the ‘abroad’ guys. The guy who had his eyes on me couldn’t stop staring, he had to sit beside me with his friends hailing him.  at the heat of the period, my friend left with her boyfriend and I was alone with the other guy. I had to choose between going to back to my hostel at that ungodly hour or going back to his hotel room with him. Awka is not as rowdy as Lagos; I chose the latter.

When I got to the hotel room, he was a gentleman. We were just gisting like old time friends. He was really fun to be with. He was extremely friendly and he didn’t try to take advantage of me. The next day, he gave me 20,000 Naira and he gave me lots of chocolates too. I couldn’t believe it, I didn’t know some guys could be this decent and generous. I was completely blown; I started catching feelings.

Our friendship grew, we kept on being friends. When he travelled out, our communication was still as usual. I had already fallen in love with him, I had even sent him one of my nude pictures. The next time he came to Nigeria, we had sex and we defined our relationship. The relationship was a beautiful one. He was taking me places and he even came to meet my family. How am I not supposed to be head over heels in love with him? he was giving my family the impression that he really wants to settle down with me, he even sent money to my parents.

Most times, he would tell me about a friend of his who is going through hell in his marriage; he would say a lot of horrible things about the wife of this ‘friend’ of his. I was stupidly dishing out pieces of advice not knowing I was telling him how to make his marriage better.

We dated from my first year in 2014 till early 2017. One morning, I received a call from a woman warning me to stay away from her husband. I could not believe it. This guy never gave off the impression that he is married. Both of us were planning a future, he had already visited my family; he was even giving me hints about engaging me. When I found out, it was hard to leave him. He didn’t know that I knew he was married. Whenever he comes to Nigeria, we ended up in each other’s arms.

His wife was not having that. She threatened me and even sent her younger brother to beat me up. Luckily for me, the younger brother didn’t do as he was told. He told me to stay away from them. The man is a nice person, but his wife is the reason behind the fight. I was already dreaming of marrying the man.

My married lover told me his wife was giving him a whole lot of headache and he needed to put his head down. It was the wife that set him up. She helped him travel abroad and helped him get his first job. He liked the intelligent conversations he had with hence the relationship which grew into marriage. His wife constant complaints were getting to him, but the fact that he was really indebted to the wife’s family, he couldn’t just walk out of his marriage. If he also decides to divorce her, she will take everything he has including their 3 kids.

I am over the guy even though there was a time where he was the centre of my world. He was begging me so we would continue our relationship, but I just couldn’t do that anymore. That’s my story.

This story is so sad. Like, I am not going to blame the woman because these men that have set out to cheat always have one negative thing or the other to say about their wives. They also tell you that they are trying to get a divorce. If their wife is not fat, she is a nag or even a lazy. Most times, they tell you that they married her because of their family. Girls, don’t listen to their lies, leave them alone!

If I have not published your story, I will. If you want to send yours, send a mail to imagenaija@gmail.com with 'I Never Knew He was Married' as the subject of the mail. This is a weekly series and my blog is not going anywhere, it is going to be in your faces for a very long time.  Don’t forget to leave a comment, subscribe and share. May we receive good news this week about something we have been expecting, amen.