My Wife Is Not The Outgoing Type 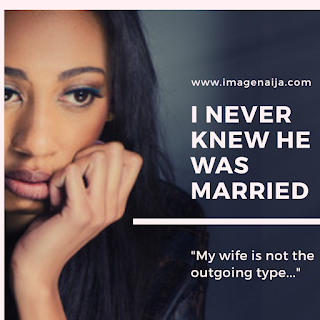 Hey guys, how are you doing? Okay, I am sorry this segment is coming late today, I have been busy reaching out to people with regards to Bella’s story click here and here. I have also been documenting my Benin trip as blog posts of course. Tomorrow, I am going to upload a very interesting story told to me by migrants from Liberia who wanted to go to Italy via Libya for a better life. I heard the economy in Liberia is on life support.

I am glad to bring you this segment again. If you didn’t follow the one of last week, click here to read. With regards to Bella and human trafficking, you know it’s a Wednesday thing. I will definitely post that on Wednesday and I will give you guys updates with regards my experience and how far we have gone trying to find help for her.

When he asked me out, we were just going out. It wasn’t like serious dating. We were just hanging out and chilling, but I really didn’t know he was married and he didn’t look married at all. After like 3-4 days, we went to see a movie. While he driving, I noticed that he kept his left hand on the steering wheel and I didn’t understand it at all. Normally, if a guy is not a lefty, he will use his right hand, but Oga used his right hand to do everything; he never took his left hand off the steering wheel. I became very suspicious, I kept watching to see if he was going to take his hand off the steering wheel, but after like 5-10 minutes of driving, his hand was stuck on there.

The funny thing is that the guy was nice. I met him when he was going to the gym and I was going to work. He gave me a lift and we hit it off from there. When we became friends, I thought he was one of the very cool, hot and spicy guys in my estate and I never assumed he was married. He didn’t even look like a family man.

I asked him why he doesn’t take his wife out for dates, I was very furious that day and we were stuck in traffic somewhere in Lekki. We kept on arguing in traffic and his wife was calling non-sop. I think she wanted him to get her pepper soup, I was feeling very uncomfortable at the same time wondering why someone who hasn’t been married for up to a year will be so interested in going out with other girls. He then started showing me pictures of his wife and his family.

I WAS PISSED because the lady is so hot, so fine and I started feeling scared for my life because I live in that estate and I go out every day. It is possible that acid is waiting for me at the gate of the estate. I asked him why he will put me in such a terrible position. You know some girls in Lagos could still date a guy who is married, so why couldn’t he tell me that he is married? I wasn’t going to hate him because he was married, but I was really angry.

He kept on making stupid excuses like the fact that the girl is not an out going person. So, your wife doesn’t go out? Like wasn’t she like that before you married her? You didn’t think that she wasn’t going out before and it will be a problem since you like going out? He’s into real estate: of course, all the stupid men who cheat on their wives are into real estate.  He doesn’t have an office of his own. Anytime he calls me or he is chatting up with me, it’s either he is at the gym or at the cinema or he is chilling somewhere. He’s always living the life. What is stopping him from dragging his wife out? Thus woman doesn’t like enjoyment so give her a spa date.  That day it was something else, he said he is trying to work on himself.

From there, he stated gisting me about his family members. According to the MR, they are people that spend immediately they get money. Money can enter their hand now and they are in Dubai already. Everyone is looking up to him in his family and he thought taking a break from family will do the trick.

The funny thing is he doesn’t even think he is cheating, he just thinks he is hanging out with girls because obviously, it wasn’t just me. He is not the only married man who has asked me out, but his own is peculiar because I really didn’t know he was married.

This is a hilarious story, the steering wheel part cracked me up. I don't know why they do this anyway.

If you have had an experience with a married man and you never knew he was married, please send a mail to imagenaija@gmail.com. If you sent me your story and I haven't uploaded it, I definitely will.

I am back from Benin Republic and I am waiting for you guys at the comment section. Have a wonderful week ahead.

Labels: I Never Knew He Was Married Relationships