I Am Married With 3 Kids

“Forget about the wedding…” 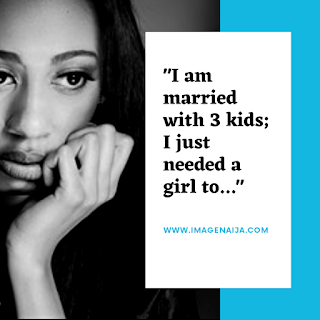 The past week was hella hectic. Everything was going well until Friday. I got a call from a friend of mine who works in Nollywood as an actor and producer to attend a meeting for him as he was not in Lagos. I work from home so leaving the house was a journey on its own. I boarded a commercial bus from Obalende to Lekki and somewhere at Civic Centre, the bus had issues. We got on another bus and the same happened. The third bus took me to my destination, but by the time I got there, the meeting was over. I made calls back and forth before I finally went home.

When I turned my data on, I saw that I had a deliverable from a client. I went to the market, bought soup stuff, cooked soup, washed clothes (I forgot to put the washing machine drainage pipe in the bathroom and before I knew what was happening, the house was almost flooded, I started to clean) and started to write. I was so exhausted. This week is not going to be like that, I hope your week was good though.

Today, it’s time for our "I Never Knew He Was Married" segment. I told you guys the stories in my inbox about this are endless. This particular one got me really scared.

Dear Imagenaija,
I am a working-class young lady and I live in Enugu. I fell in love with this guy and I honestly never knew he was married. I was so desperate for marriage: there was pressure everywhere and I just needed a husband, I wanted to be Mrs Somebody.

I met the guy, he asked me out and I fell for him. He is such a smooth talker. He told me he was in Enugu for business and he is based in Port Harcourt. I didn’t care where he was based. I wanted a man and wherever he is based, I was ready to be based there with him even though it means me abandoning my job.
After dating for over 3 months, he asked me to marry him. You already know what my answer is, right. Well, if you don’t, it was yes! I believed it is not how long. After all, some people date for 6 years and move on.

He was still in Enugu for his business trip, he was staying with someone. I decided to rent an apartment for my fiancé so he could stop staying with his friend. I was basically footing his bills, I paid for almost everything.
When I told my parents about him, they didn’t agree. They felt there was something fishy about him. I didn’t care about their opinion, I started purchasing things for my traditional marriage with my money.

A friend of mine told me that the guy is married with 3 kids, but I felt she was an enemy of progress, She told me she met the guy my fiancé was living with previously and that is what the guy told her. I cut her off immediately. She wasn’t married, she didn’t even have a serious boyfriend. So, I felt she was jealous I was making progress with my life.

One day, when I got back from work, I found a letter from my fiancé. He came to my house because he had my key, took my money and left a letter. He told me that he is married with 3 kids and he just needed a girl to f*ck with. Said I should forget about the wedding. Turns out he was done with his business in Enugu and had to move back to Port Harcourt.

I almost killed myself, but I am standing tall today; single, but not desperate. The lies they tell most times. If you are married, say it. After all, there are girls who will still date you even when they know your marital status. Don’t lead a woman on like that, it is not fair.

I completely agree with her. Guys, if you are married, go straight to the point. some girls will definitely date you. Don’t hide your marital status and try to be faithful. How hard can sticking to one woman be? The stories are just tiring and they never end. Please, you guys can do better. Stop this!

Labels: I Never Knew He Was Married Marriage RelationshipsRelationship